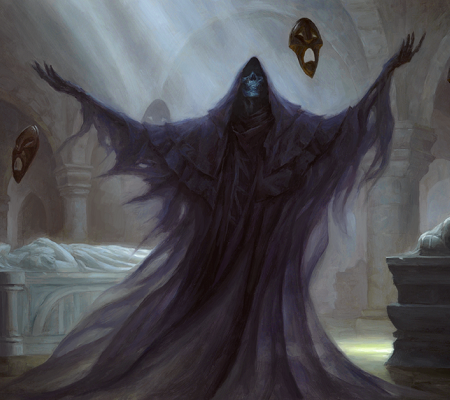 Session Fourteen – Into the Realm of the Dead

No level-ups this session.

The session started with the PCs separated in two teams, where we left off last time, and with Alba the Psychic/Magic-user and Angelina d’Monica III the Assassin switching places with Hoder and Fenrir.

Team Alpha had just exited the purple haze, with Haxxl and Make Me continuing the exploration of a long passage running east, having found a clean and neat cave containing  a little used backpack filled with adventuring gear and two barrels of water and wine respectively. From that cave, a very straight and obviously man made corridor was running south east…

The duo decides to go back to get the rest of the crew before exploring further. Upon returning, Haxxl sneaks into the corridor, carefully checking everything as he goes. Metal ring torch holders sit on the walls, unlit. After some 50-60 feet, there’s a wooden door on the east wall but the wild elf also detect a secret door a few feet back on the west wall. After some searching and listening, they decide to try the door, which is open. Inside is a square 25 foot room with bookshelves, a neat pergament adorned desk and two work tables laden with glass beakers, glass tubes and containers holding various liquids, powders and other reagents, signifying the work place of a wizard or alchemist. The pergaments and tomes on the bookshelves confirm the same. In the room are also three wooden chests. Alba casts Detect Magic and one of the chests is indeed radiating magic as is the secret door across the corridor. Haxxl checks for traps and suspects that one of the chests is trapped. Alba uses Open/Close to manipulate the magic chest from a distance, triggering a vicious needle trap as the chest opens. Inside, they discover many coins of copper and gold as well as four magic potion vials. Haxxl and Alba then opens the next two chests using crowbars and swords. It turns out that they are trapped with poison needles as well. One of the chests contain many silver coins, the other fine silk fabrics, fur garments and very feminine and delicate clothing along with the fine jewelry of a lady. However, they also cannot help but notice that the garments are quite revealing, more like hareem outfits. They take the potions and Alba puts on some of the expensive looking clothes. The plan next is to rendez-vous with Team Bravo and continue together as they have no means of opening the magically barred secret door by themselves.

On the way back, in the room where they fought the tentacled centipede-like creatures earlier, they suddenly pick up the high frequency sound of quickly flapping wings and all of a sudden, nine Stirges are upon them!

Haxxl manages to cleave one right away, but two are focussing on the unarmored psychic wizard, attaching themselves to her, sucking her life away as she struggles to get them off.   The PCs fight valiantly, slashing the air with bright arcs of steel, cutting down the annoying things. After an interrupted try, Alba manages to cast Sleep, causing four of the flying abominations to crash to the ground. And after some more fighting, the Stirges are defeated, but Alba has lost a great deal of her physical strength (6 CON loss). Our heroes continue on their way up…

Team Bravo had just fought Gorbash the Mad Max ogre and then some blood skeleton warriors and when we left off last time, they were exploring the narrow tunnel running south west from the blocked passages…

After some 60 feet, the tunnel turns abruptly north west and enter a big, deadly silent cavern running south west. Angelina sneaks in and nervously advance along its length. About 35 feet in, she finds four spent torches and a crushed glass vial on the floor…

The rest of the crew follow and after 35 feet more, the cavern narrows again turning south east. The air is getting cleaner, but with a slight tint of ammonia and the sound of flapping wings can be heard. Many flapping wings…

Before them, a vertical shaft opens up, going about 200 feet up to the surface above. A tiny sliver of starlit night sky can be discerned high above. And what seems to be hundreds of winged creatures, hanging on the sinkhole walls.

Angelina uses the rock with continual light to peak into the shaft, seeing lots of giant bats and that the portion of the tunnel passing through the shaft is covered in slippy and gross bat guano, making hasty movement risky. Angelinas courage falters, so Blitz takes over and he hastily moves the 50 feet through the shaft. The others follow and at last Angelina has to move across. The bats stir and flap their wings but they do not attack.

On the other side, a large cavern with wet stone walls open up, curving south east, ending in a worked stone wall, adorned with a iron-band reinforced wooden door. On the ground in front of the door are two battered longswords.

The dwarf checks the wall, saying that this obviously is a natural wall (rolled a 1 on “Notice Stonework”). After checking for traps, they try to open the door only to realize that it is stuck. The dwarf tries to kick in the door, making a hole in the wood and realizing that it opens up towards him. Then, he breaks it open with a mighty pull using his trusty crowbar, revealing a very dark rectangular chamber, containing six stone sarcophagi. As the first PC enters the tomb, the sarcophagus lids slide off and six skeletons armed with scimitars and shields rise up and immediately attack, their gem eyes glowing red with unlife… The PCs back out of the tomb to create a choke point for the enemy and Angelina send one of the undead back to hell with a mighty stab from behind. The dwarven cleric tries to turn the skeletons but to no avail. Suddenly the skeletons stop and move aside. A compact darkness, radiating a bottomless fear seems to flow towards the door, now stuck open! As it comes nearer, an almost transparent apparition clad in a black chain armor and adorned with the horned goat pentagram of Orcus stares at them from the Void, making Old Sleaze turn and run in terror (and simultaneously crap his pants). The others manage to stand their ground, even if the fear turns their knees into jelly, their every fiber protesting against the madness of resisting the undead lord (and they simultaneously crap their pants). Blitz casts Invisibilty to Undead on himself.  Garfield runs for cover. Angelina tries to attack from her hiding place behind the door, hitting the thing but only seeming to aggravate it more. It reaches for her  with a phantasmal claw, passing right through her armor and drawing her life force out…

Simultaneously, Blitz casts another Invisibility to Undead on her and tells her to run for her life. With some acrobatic moves, Angelina gets out of the monster’s reach and they run back all the way to the cavern with the spent torches, where Old Sleaze is standing, panting and looking sheepish…

And here we had to finish the session! The two teams will now meet up and the next time we play, all the PCs will be gathered again.