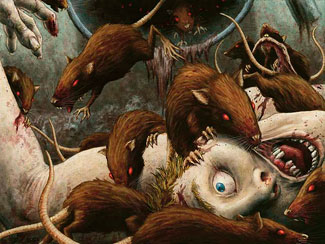 No level-ups this session, but Old Sleaze and Blitz are pretty close…

As last time, our would be heroes were separated in two teams when we began.

Team Bravo had just escaped some undead horrors and doubled back to the place where they fought the scruffy ogre and decided to press further on to the east where they had not expplored before. It turned out to be the ogre’s filthy den, filled with junk but they also found 5 large sacks of valuable loot as well as many dented armours and weapons, including an exquisite elven longbow of master craft.They also found a small wooden chest which resisted all attempts to be opened. At last, the grumpy dwarf cleric decided to smash it open, revealing two intact potion vials and one broken. The greedy dwarf decided to slurp up the remains of the broken potion, only to discover that it was some kind of poison! Luckily for the dwarf, the small amount ingested didn’t kill him, but it has left him rather weak [CON damage, with all consequences that will bring]. As the loot found was very heavy and bulky, they only took the carryable things, meaning to come back and take the rest later and bring it to their “treasure stash”, located in the holy temple to Muir one level below. They then went back to the big cavern where the dwarf was almost devoured by the ankheg in order to meet up with the rest of the crew.

Team Alpha were already at the meeting point after last session’s ordeals.

After assembling and a short briefing, they decided to check out the area beynd the southwestern ledge in the large cavern, but first Angelina snuck into the semi-hidden passage going northwest from the cavern. This passage led northwest, splitting east and ending in a stair going down. She decided to stop and return to the others.

The PCs ascended the nearly vertical slope and found a small cave system with two main passages going straight west and south. The western passage looked like the walls were man-made and they decided to invesigate. The passage led to a dead-end alcove with four rotting coffins. Haxxl went in and opened one of the lids to reveal a skeleton with a strange amulet around it’s bony neck and buried with a curved sword and a tarnished metal shield. Suddenly the skeleton sprang up as did three more from the other coffins. A brutal but short battle ensued. After having sent the undead back to Hell, the PCs decided to keep the weird amulets.

The south passage constricted and split up in three directions after some 50-60 feet. In the dim light they could see lots of tiny eyes, reflecting the light from the torches and lanterns. Rats! Lots of them! By using burning oil and alchemist’s fire to drive the creatures back, the PCs managed to advance into the passages, only to be beset upon by even more rats. It was also here that Ranulf the torch-bearer was overwhelmed by the hungry rats and bitten to death and partly eaten by the giant rodents. Sadly, there will be no bards singing his lament… It was also here that Alba the semi-nude Psychic Wizard got a chance to contemplate the appropriateness of her choice of garb after having been beset by the rat horde. She now has many small bleeding sores covering her exposed skin…

The east and west narrow passages seemed to lead to the rat nests only, but the south passage widened up after some 90-100 feet to reveal a larger strangely shaped cave. There’s a narrow passage going east and in the far south end a 10 foot depression leading to an obviously man-made structure judging by the right angles and smooth walls. Now the PCs make a dick move by convincing the last hireling, Garfield, to go down the structure to “see what’s there”. Blitz casts Continual Light on a rock and first they throw the rock down the depression. Garfield climbs down a rope and moves into the room below, moving out of sight. He shouts that he sees six rotted and destroyed coffins. Suddenly, his shouts are broken by a terrible scream of terror and death anguish…!

Cliffhanger! Here we had to stop for the session. To be continued the 5th of June…